Vajradevi has been practicing within Triratna since 1983 and was ordained by Sanghadevi in 1995. She has worked in a number of team based right livelihood business' in London, Birmingham and Cambridge, UK.

She led the search for a retreat space in Spain and helped to start Akashavana in Spain, where many women have now been ordained, including several from this part of the world.  It was a 7 year labour of love, searching, purchasing, fundraising (with invaluable guidance from Samayasri ) and overseeing the building works.

Vajradevi has practiced in Myanmar, pursuing a particular approach to Satipatthana with Sayadaw U Tejaniya, and also with Joseph Goldstein in Europe and the US. Her main work (apart from writing) is teaching what she has learned in retreat centres in the UK and Europe (with Bhante's encouragement). She's also a Trustee of her local Centre in Shrewsbury - and is very involved there.

Her recent book: Uncontrived Mindfulness, Ending Suffering through Attention, Curiosity and Wisdom, is available through Windhorse, Amazon, and bookstores everywhere. 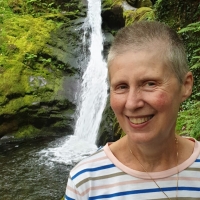