Nagapriya was born in the UK in 1969. While studying for a philosophy degree in Leeds, he began practising with the Triratna Buddhist Community and was ordained as a Dharmachari in 1992. He later studied for a master’s in the history of religions at the University of Manchester. In 2013 he moved to Mexico and helped found the Centro Budista de Cuernavaca. He is also co-founder and director of Editorial Dharmamegha, a small publishing venture dedicated to sharing Buddhist teachings in the Spanish-speaking world. In addition, he works as part of a team training men from Latin America for ordination into the Triratna Buddhist Order. Since 2019 he has been a member of the College of Public Preceptors.

Back to Visiting Teachers 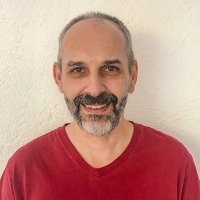