Born and raised in Iowa as a Methodist and migrating to California in 1967, Karunadevi realized she was a Buddhist in 1980 when friends introduced her to the Buddhist teachings of Lama Govinda.

In 1988 she met Manjuvajra, chair of Aryaloka Retreat Center in New Hampshire, who was giving a talk and workshop at Stanford University.  On April 8 of that year,  she, Alan Sponberg (now Saramati), and his wife Jean (now Varasuri) hosted the first weekly meditation and study group in Menlo Park, south of SF.  This was the origin of what would become the San Francisco Buddhist Center (SFBC). Since 1991 it has resided officially in San Francisco as the SFBC.  She also started working to found the Daly City Youth Health Center in 1988 and became its director for 10 years when it opened in 1990.

In 1993 Urygen Sangharakshita ordained her into the Triratna Buddhist Order.  She then became mitra convenor for the SFBC and also began working with ordination training for women in the US and Canada.

In 2004 she became a private preceptor.  In 2011 she became a Public Preceptor and has conducted public ordinations in Spain, New Hampshire, and San Francisco.

Currently she lives with her husband Acarasiddhi in Brisbane, a small town just south of SF.  She has two grown children and 2 grandchildren.  Recently she turned over coordination of the ordination training process to other experienced Dharmacharinis and continues to serve as mentor, preceptor, and kalyana mitra for those who want to deepen their going for refuge. 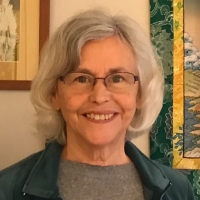